F-Zero: GP Legend is the fifth released installment in the F-Zero series and the successor to F-Zero GX. Considered a reboot of the franchise, the game is based on the anime, and differs considerably in story and setting from its predecessors. GP Legend features gameplay very similar to the original F-Zero and F-Zero: Maximum Velocity.

The game features over 30 playable characters, 8 of whom are available in Story mode, including newcomer Rick Wheeler, the evil Black Shadow, and series hero Captain Falcon. As in earlier games, a story-driven campaign leads players through a series of futuristic races across the diverse environments of many different planets.

Story mode is one of the two modes available at the start of the game, along with Grand Prix mode. In this mode, the player engages in a series of missions that describe the story of the game. Eight characters total can be played in this mode, though only Rick Wheeler is available from the beginning. The other characters must be unlocked by advancing through the story.

In Grand Prix mode, the player chooses from one of the 34 playable characters (most of whom have to be unlocked), and races through a series of 5 different tracks. Unlike the previous games, the names of the cups in GP Legend are not derived from chess pieces, playing cards, etc. Instead, the cups carry the Bronze, Silver, Gold, and Platinum cups commonly used in racing video games. The Platinum cup can be unlocked by beating the first three cups on "Novice" and "Standard" difficulty. On "Expert" level, each track from the Bronze, Silver, and Gold Cups are replaced with a harder version, and the name of the track has the Roman numerals "II" to denote that the track is the second version. In each race, racers is scored by their finishing position. The points are totaled up after each race, and the pilot with the most points wins. 100 points is the maximum amount that a pilot can earn in a single race, and 15 is the minimum, unless the pilot's craft is destroyed, and the pilot gains no points. If the player's craft is destroyed, they has the choice to use a spare machine (4 is the max) and redo the race, or quit the cup. Unlike in F-Zero GX, the player does not get a spare machine after destroying 5 machines.

In Time Attack, the player races through 5 laps on a single track, alone or against a ghost racer, and tries to beat the best time. A scoreboard of the top five best times for each track is displayed on the track selection screen, along with the best time for a single lap. After getting the best time, the player can choose to save his/her ghost to race against later, though only one ghost can be saved at a time.

This is the mode where the player gets access to Championship.

Training mode allows the player to race around a track of their choice for practice purposes. The player is able to choose the number of laps, the number of opponents, and the difficulty level. The player is only able to race on tracks that they have already completed in Grand Prix mode, however.

Zero Test is a mode in F-Zero: GP Legend. In it, the player attempts to complete a series of challenges, usually involving reaching the end of a specific portion of track within the allotted time. There are 4 available classes (C, B, A, and S), each one featuring 12 different tests. The classes are unlocked in sequence; each class the player completes unlocks the next class. Times are rated from bronze to silver to gold, with gold times being extremely difficult to achieve.

In Link mode, the player races against up to four other human opponents via Game Boy Link Cable. Two different modes, Single-Pak and Multi-Pak, are available. 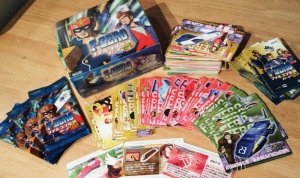 The "Pillow Pack" of the standard forty cards

This ability was not available in the US or European versions of the game, as the e-Reader proved unpopular in the US and was never released in Europe. As such, the e-Reader content is built into international versions of F-Zero: GP Legend with additional unlock requirements added.

F-Zero: GP Legend received generally favorable reviews from critics, and currently holds a 7.7 rating on review aggregator Metacritic.[4] Craig Harris of IGN.com gave the game an 8.0 out of 10, calling it "a solid and well-designed game", while also commenting on its many similarities to F-Zero: Maximum Velocity.[5] Erougamer reviewer Tom Bramwell gave GP Legend an 8 out of 10, and praised many elements of the game.[6] Avery Score of GameSpot also gave the game an 8.0, giving special mention to its sound.[7] Jeremy Parish of 1-Up.com gave GP Legend a more negative review, grading it a with "C" and complaining about the game's dated appearance.[8]